Geeta (Zarina Wahab) is the youngest of Pitambar Choudhry’s three daughters, single, child-like and carefree. Her simple village life in Madhupur involves going to school, helping her mother (Dina Pathak) with household chores and playing with her seven-year-old neighbour Deepu. 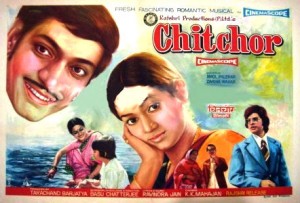 Pitambar Choudhry (A.K. Hangal), popularly known as ‘Masterji’, is the headmaster of the village school. Masterji is concerned about Geeta’s marriage and to assist him in finding a suitable match for Geeta, his older daughter Meera writes to him. The prospective match is an engineer who is moving to Madhupur as the executive engineer for the new bridge under construction. From description, he seems the perfect boy for their girl if only he would like her and say yes to the match.

Masterji welcomes the special guest Vinod (Amol Palekar) with a wide smile and heart, helps him get settled in a homey bungalow. His friendly demeanour endears him to the entire Choudhry family with special attention, meals and conversations from Geeta’s mother. Eventually, Vinod and Geeta develop a friendship which soon turns into courtship.

Just when the overjoyed parents are considering wedding dates, they receive yet another letter from Meera informing them that the engineer that was supposed to come will arrive only now. Dumbfounded, sheepish and perplexed, they realise the blunder they had made. Never even asking Vinod his name, they had assumed it was the ‘suitable boy’ Meera had recommended.

In an honest attempt to amend their mistake, they welcome the actual prospective son-in-law Sunil (Vijyendra Ghatge), only to realise he is in fact Vinod’s boss. And thence begins the hospitality towards Sunil. Out rolls the red carpet, while Sunil and Vinod are unaware of the entire confusion. 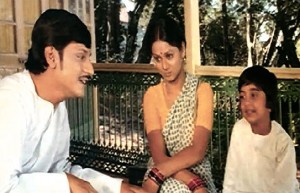 Geeta is asked by her parents to stop seeing Vinod as Sunil is a better prospect. But Geeta by now knows what her heart wants. She firmly stands her ground. Amidst picnics, family feasts and singing, Vinod and Sunil become aware of the situation. Vinod, out of respect for his mentor and boss, decides to sacrifice his love for Geeta and leave town. Sunil, upon recognising Vinod and Geeta’s feelings for each other, brings them together. His sacrifice gives Geeta her Chitchor and the story its happy ending.

Tarachand Barjatya’s Chitchor, released in 1976, is a film known as much for its heart-felt, straightforward story as for its unpretentious style of film-making. It proves yet again that the Hindi movie fan is hungry for a captivating story, characters that aren’t stars and music that doesn’t age. The music of Chitchor is seamlessly woven into the various situations making the songs part of the story. Vinod likes to sing and is a classical music enthusiast. Hence the Hindustani classical raga-based songs like Gori Tera Gaanv based on Malkauns or Jab Deep Jale Aana in Yesudas’ divine voice. Hindi cinema folklore has it that the film’s music director Ravindra Jain once remarked that if he ever gained his eyesight, the first person he would like to see is Yesudas, the man who gave a voice to his numerous popular songs.

The characterisation representative of good old middle-class values lends the film an air of believability. Every scene that portrays Vinod and Geeta’s growing companionship has Deepu dancing and prancing about. Little Deepu’s non-intrusive yet constant presence in their reverie -whether walking through the woods or singing sweet songs – gives the story a special feel.