How often have we found a movie with an elephant as the hero? Never? You may just be wrong.

Ramu, the elephant is undoubtedly the hero of the 1971 Hindi film Haathi Mere Saathi starring Rajesh Khanna and Tanuja in the lead roles apart from Ramu.

Rajkumar ‘Raju’ (Rajesh Khanna) is orphaned at a young age losing his father (Abhi Bhattacharya), the only trace of family left after his mother passed away. His father succumbs to his injuries after Raju and his father meet with a road accident. Raju falls out of the car and rolls down into the forest where a herd of four elephants saves him from wild beasts. Raju finds his way home and brings along with him the elephants or rather the elephants bring him home. His father relates the elephants’ protection to his son as a result of his prayer to Lord Ganapati (the Hindu elephant god) and asks Raju to never forsake them.

Raju names them Ramu, Damu, Mahesh and Ganesh and they become his life-long friends and companions. Raju grows up with the elephants protecting him, playing with him and being loved and cared for by him. As a young man, he meets Tanu (Tanuja) and they fall in love. However before they get married, they are not free of hurdles. Raju loses all his property and bank balance in a court case to his relatives and so Tanu’s father Ratanlal (Madan Puri) refuses to give his daughter’s hand in marriage to Raju, asking him to exit his daughter’s life. To pacify Tanu he gives her a false reason for Raju’s disappearance. Overnight Raju is homeless, penniless, loveless and without anyone to call his own except his four beloved elephants. To feed his elephants and himself, Raju starts doing street performances with the elephants. 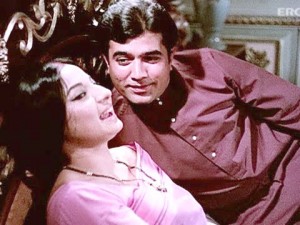 On finding out the truth about Raju’s leaving her, Tanu runs away from her father’s house and manages to locate Raju and joins him in his work. After immense struggle, they manage to earn a decent living, starting life from scratch. Eventually, they start an animal zoo called Pyar Ki Duniya that becomes a big success. Now that Raju is well-off, he asks Ratanlal for Tanu’s hand in marriage and Ratanlal readily agrees. Raju and Tanu have a son together and life for them seems to be a smooth sailing. Ramu plays with their son, protects him and even swings his cradle. But one day despite everything Tanu develops a phobia for elephants. She witnesses a child in the hospital who gets trampled upon by a pet elephant. On fearing the same might happen to their son, she asks Raju to keep Ramu chained which is unacceptable to Raju. A couple of misunderstandings later, their marriage is at stake with Raju having to choose between his wife and son and Ramu who is the reason Raju is alive today.

Amidst a lot of tension in the family, vicious and near fatal attacks from the competitors Sarwan Kumar (K.N. Singh) and Gangu (Sujit Kumar), Ramu manages to bring the family back together, sacrificing his own life nonetheless.

Ramu and Raju’s tale ends on a painful note, however giving out a strong message of selfless love and loyalty. Through various thought-provoking moments the film brings out the irony that humans can be more animalistic than animals and animals can be more humane than humans.

Given the era it was made in, Haathi Mere Saathi was a path-breaking film that seamlessly merged the sensitive subject of cruelty to animals with the personal journey of Raju and Ramu who teach the world a lesson in compassion.

The film was critically acclaimed and the biggest hit of the year at the box office. Needless to say, it had success written all over it, given its concise screenplay by Salim-Javed, foot-tapping music by Laxmikant Pyarelal and award-winning lyrics by Anand Bakshi. The music being one of the main highlights of the film, each song has a unique role to play in the movie, whether it is the title track by Kishore Kumar or Nafrat ki Duniya ko.

Haathi Mere Saathi is a yarn spun out of genuine passion and a sense of adventure and given what it carries on its shoulders it is not likely to get old any time soon.