Abused, beaten and eventually kicked out by her husband, Pushpa has no choice but to return to her mother’s meagre dwelling. Her misery is nowhere close to its end. Vicious and misleading allegations by neighbours lead her simple-minded mother to disown her. Distraught by the humiliation, she decides to end her life when Nepal Chacha, a nefarious old man, a con artist, saves her only to throw her into the world of prostitution. Nepali Babu played by Madan Puri is the quintessential mean old man true to Hindi films of the 70s. He reeks of villainy and deceit the moment he enters the scene. 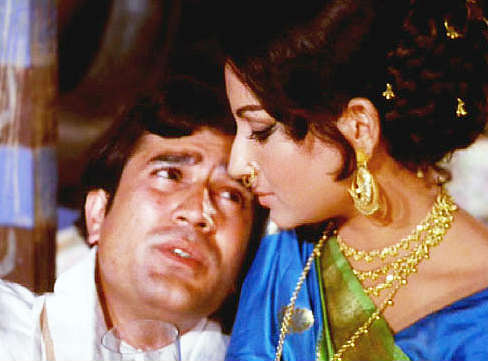 Pushpa finds herself at the abode of ‘mausi’ played by Leela Mishra. On her very first day, as she sings Raina beeti jaaye, Anand Babu, a well-to-do man of the city finds himself there in a drunken daze. Captivated by Pushpa’s singing, he follows her voice and meets her. Soon, he becomes an admirer of Pushpa’s voice and heart. Within no time, Anand Babu and Pushpa form a connection that goes beyond what people assume about their relationship.

Anand Babu, a character brought to life by Rajesh Khanna, is a shell of a man devastated by a dysfunctional, non-existent marriage who has taken refuge in alcohol. When he meets Pushpa, he feels her pain and finds in her the companion and the soul mate he was perhaps always looking for. Shakti Samanta, true to his craftsmanship, portrays with absolute tenderness and dignity, the selfless love between Anand Babu and Pushpa. A love no less than devotion.

The iconic Chingari Koi Bhadke symbolises the emotional turmoil and disappointment in the lives of Pushpa and Anand Babu. They empathise with each other without being part of each other’s troubled lives. Anand Bakshi’s skill as a lyricist speaks volumes through ‘majdhaar mein nayia dole, to maajhi paar lagaye, maajhi jo naav duboye use kaun bachaye’, getting him a nomination for Filmfare award for Best Lyricist.

Meanwhile, Mahesh bhayia, an old neighbour from Pushpa’s village moves with his second wife and children into her neighbourhood. Mahesh’s eight-year-old son Nandu, ill-treated by his step mother, receives the missing motherly love from Pushpa. Nandu, despite several warnings from his father and stepmother, gets close to Pushpa who showers all her love on the little boy for whom she assumes the role of a mother.

The insightful characterisation of ‘Anand Babu’ is worth a special mention. His good-naturedness is portrayed when he expresses his resentment towards the injustice done to Pushpa by Nepali Babu or when he reunites Nandu and Pushpa during the film’s climax. His ability to diffuse tense situations by saying something profound in a light hearted vein is unique and likeable. Interestingly, his character is based on Ananta Babu of the 1970 Bengali film Nishipadma made by Arabinda Mukherjee, which was in turn based on Hinger Kochuri, a short story by Bibhutibhushan Bandopadhyay. Amar Prem got Arabinda Mukherjee a Filmfare Award for Best Screenplay. The film also garnered various other Filmfare nominations such as Best Actor for Rajesh Khanna and Best Singer Male for Kishore Kumar among others.

Coming back to the plot, Pushpa’s strong desire to have a family, her own children and her love for Nandu are a far cry from reality. For the world, Pushpa is an immoral woman who is tainted by the darkness that the brothel stands for. However, in reality, she is “pure as the Ganga” in Anand Babu’s words. Though her world is as far away as possible from the world of the “respectable” few, she has more humanity and dignity than the holier-than-thou elites. Kuch to log kahenge, one of the finest musical compositions by Rahul Dev Burman is symbolic of this sadness and dichotomy in her life.

Just when Pushpa decides to leave with Anand Babu for a better neighbourhood, far from the tainted alleys, Anand Babu’s brother-in-law visits her unexpectedly and warns her against seeing Anand Babu again. Pushpa is aware that Anand Babu’s wife had alienated herself from him long before he met Pushpa. And despite knowing that Anand Babu would never have a happy married life with his wife, Pushpa agrees to never seeing the only person who ever loved her truly. After all, there is a price to pay for everything. Even for having a generous heart. A truly heart breaking moment of the film is when Pushpa, with tear-soaked eyes, watches Anand Babu leave.

The film has a profound message for the viewer when during Durga Pooja the sculptor asks for some mud from the brothel’s front yard. On being asked by his assistant why for an idol of the goddess, would he use mud from such a place, he explains that without the mud from the brothel, Durga idols are not kept in the religious ceremonies. The director, through this short scene, very cleverly drives home the message that even dirt has the potential for good. That everything is not always black or white but there’s a possibility for shades of grey. Nandu brings a Raat Ki Rani plant and on the sculptor’s advice plants it in the brothel’s yard. Pushpa promises little Nandu that she would always nurture the plant till it flowers.

Shortly after, Nandu falls sick and his father can’t afford the expense of a good doctor. Pushpa takes Anand Babu’s help to secretly pay for Nandu’s treatment from the best doctor in town. A laden moment arrives when the doctor asks Anand Babu about his relationship with Nandu. The beauty of this whole equation is that though Anand Babu is no way connected with Nandu, he feels close to him because of his feelings for Pushpa.

Nandu has to now move back to his village with his parents. He promises Pushpa to come back and meet her when he grows up.

Years later Nandu, a grown man, has moved back to Kolkata. He is now an engineer, married and has a family. Though he has all joys of life, he is still searching for Pushpa, the woman who was more than a mother to him. He comes back to his old neighbourhood and rents the house opposite the brothel watching the Raat ki Rani in full bloom.

Anand Babu, now old and lonely, finds Pushpa in a wretched condition cleaning dishes in a guesthouse. The reunion of the two is an awaited moment of the film.

While she is working there, her past comes back to haunt her. One of the guests staying in the guesthouse is her ex-husband. Now in a vegetative state, he is blind and bed-ridden. Despite what he put her through years ago, Pushpa takes care of him and he passes away without realising that the woman who tended to him in his final days was the woman whom he had thrown out of his home and life.

All characters come together in the end. Nandu has a chance meeting with Anand Babu at Dr Ghosh’s clinic who brings him to Pushpa. Nandu takes Pushpa home as Anand Babu watches them leave in silent satisfaction.