Would it be so strange if a cook spouted life philosophy and shared sublime thought? It would? Then all you have to do is watch Hrishikesh Mukherjee’s Bawarchi.

True to Hrishikesh Mukherjee’s style of storytelling, the film is set in an Indian town which could be just about anywhere. Bawarchi is a clean, light-hearted film about the Sharma clan who reside in Shanti Niwas. As the sutradhar of the film Amitabh Bachchan puts it, Shanti Niwas, far from its name, is a battlefield of clashing opinions where the inhabitants are constantly bickering with each other. Reason? Bawarchi! Rather the absence of one- the Sharma family can’t seem to retain any cook for more than a month. 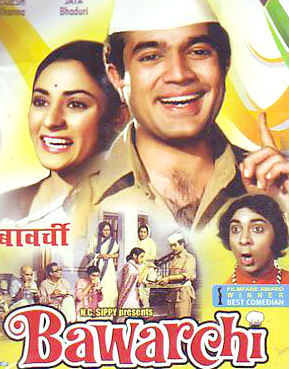 The eccentric Shivnath Sharma (Harindranath Chattopadhyay), a retired postmaster, is the owner of Shanti Niwas. With him stay his three sons Ramnath played by A.K. Hangal, Kashinath and Vishwanath (Asrani), daughters-in-law Sitadevi (Durga Khote) and Shobhadevi (Ushakiran), granddaughters Meeta and Krishna(played by Jaya Bhaduri) and grandson little Pintu babu. Krishna’s parents Harinath and his wife passed away in a car accident when she was very young. An amicable young woman, Krishna takes on all domestic chores ungrudgingly every time a cook quits his job at their household.

The film begins with the present bawarchi planning to quit, leaving the Sharma household in an erratic state. Amidst desperate, grumbling cries for help with the kitchen and growing discord amongst the family members, walks in Raghu the mysterious new ‘bawarchi’ played by Rajesh Khanna. From the moment he walks in, he knows just the ways and means to ease their troubles away. Whether it is ‘badi ma’, ‘chhoti ma’ and ‘dadu ji’ or ‘bade babu’, Babbu bhayia and Krishna behen, he wins every heart in this home. 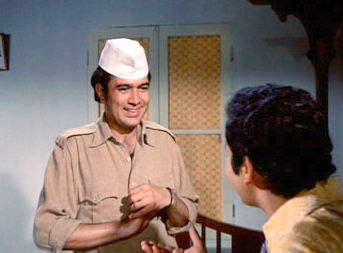 Raghu manages to demystify life and its secrets as he sings, teaches dance and cooks up a storm in the kitchen. The good humoured cook slowly inspires the estranged family to rediscover bonds of love. Once again, the director’s skill is expressed in the way he effortlessly conveys a profound message in a light-hearted vein. The character of this bawarchi that Mukherjee has managed to spin is the quintessential friend/ philosopher/guide in the guise of an expert chef who, by the way, cooks his way into the hearts of each and every person. His talents are unique and way beyond the confines of the kitchen.

After fulfilling his mission of uniting the family, Raghu adds the final touches to what the family mistakes as a charade in the climax of the film. He steals the jewellery box and runs away only to hand it to Arun, Krishna’s knight in shining armour/love of life. He shares his plan with Arun and asks him to take the box to Shanti Niwas, claiming to have saved it from Raghu. This, according to Raghu, would win back Arun’s place in the home and hearts of the Sharma family who had cut him off due to a misunderstanding earlier. 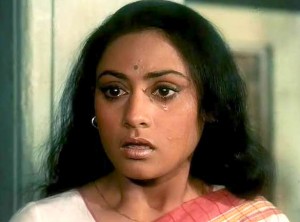 As the shocked family members express their anger with Raghu, Arun reveals the truth about Raghu’s honesty and intentions. In an emotional moment Daduji brings Krishna and Arun together with Raghu to thank for it.

The crux of the film lies in the climactic monologue by Raghu. Despite all the success and happiness Raghu gets disillusioned by the discord in the world around him. He sees people in constant disputes and clashes on the pettiest of issues. ‘Love’ seems to be lost. So he vows to help people rediscover lost love. He finds families that are unhappy despite having everything. He goes to work for them as a cook and slowly helps them see again the love that always existed but had become rusty. Raghu hopes to create a ripple effect of this love and happiness in every family.

And so the bawarchi bids adieu once again, heading off bag and baggage, to yet another unhappy home waiting to be fed.