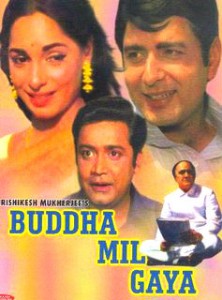 A strong story, simple execution yet a movie that keeps you glued, Buddha Mil Gaya is a story of two unemployed friends Ajay (Navin Nischol) and Bhola (Deven Verma) trying to make a living by clicking photographs of visitors, tourists in public parks. Genuine, reliable and decent, yet unable to win over the old landlady ‘dadima’ (Lalita Pawar) who is perennially upset with the duo for not getting her house rent for months on end.

Dadima’s adopted granddaughter Deepa (Sonia Sahni), their faithful peer lets them sneak back in the house every night after dadima is asleep, recognising their goodness. The other underlying reason why Deepa goes out of her way to help them is perhaps due to her and Ajay’s love for each other. This is when comes one of the most well-known Kishore Kumar songs. The fans of this song may not know the movie it belongs in, but Raat Kali ik Khwaab mein aayi is an integral part of all antakshris and get-togethers; breezy, and effortlessly sung by Kishoreda and loved by people from all generations.

Amidst their struggle and failed attempts to find work, they stumble upon an advertisement about an old missing man Girdharilal Sharma (Om Prakash) who is asked by his attorney to return in 15 days, failing which his share of business stake of fifteen lakh rupees will be distributed among his remaining partners. Upon seeing this, Bhola and Ajay have a genius idea of searching the old man in the hope of borrowing a lakh from him to help themselves out of the dire straits they find themselves in.

To their surprise, they find the old man’s face in the background of a photograph they clicked in the park. Assuming they’d see him there again, they go to the park and find him sitting on a park bench with a newspaper. They cook up a story calling him their long lost uncle and request him to come home with them. Girdharilal, though overhears their dubious plan, agrees to go with them upon hearing about their landlady’s 19-year-old granddaughter Deepa. The mention of this girl reminds him of his own long-lost daughter Deepa. In the hope of finding her, he goes home with them.

‘Chachaji’ as Girdharilal is referred to by the boys, is moved by the warmth and goodness of dadima and Deepa and stays the day on their insistence. At this point in the story we get to experience the quintessential RD Burman magic – Jiya na laage mora by Lata Mangeshkar based on Raag Khamaj, the composer’s favourite Hindustani raaga. 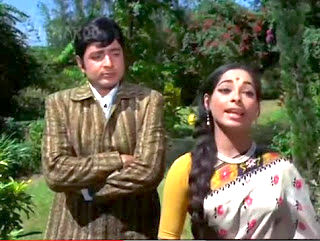 Chachaji overhears Ajay and Bhola’s conversation about the 15 lakh rupees and realises their good intentions. In order to set right the situation yet not revealing the truth, he stays back with them.

Slowly, the story starts to unfold, and one by one Girdharilal’s partners get murdered under mysterious circumstances. From Ajay and Bhola’s perspective, every murder coincides with chachaji disappearing from home for the period when the murders take place. Every time a partner is murdered, they find chachaji singing Aayo kahan se Ghanshyam at home indicating he never went anywhere, however the truth seems far from it. This is an interesting, a rather unique use of this devotional Manna Dey song by the director, thus lending humour to a murder mystery waiting to be solved.

Eventually the true story emerges through a series of baffling incidents, a musical performance by chachaji, Deepa and the women’s army led by Parvati (Aruna Irani), Bhola’s love interest.

Chachaji reveals that he was falsely accused of fraud by his partners and put behind bars for 20 years. To make matters worse, he had lost his wife and daughter Deepa. On getting out of prison, he decides to punish the perpetrators. However, each time he goes to do so, one of the partners Bhagat kills them all out of greed and chachaji ends up fleeing the scene.

In the climax of the film, chachaji is saved despite the circumstantial evidence of the murders pointing towards him as it turns out that Shetty, the faithful assistant of Bhagat, is in fact an undercover policeman investigating the case. As it turns out, chachaji reunites with his wife and daughter. Bhagat, on seeing he is caught with nowhere to escape, jumps off the building killing himself.