Allahabad based Dr Parimal Tripathi (Dharmendra), a Botany professor, is staying at a guest house at a hill station. In order to help the watchman go see his ailing grandson, he offers to cover up for him by playing the watchman for a day. Meanwhile, a bus full of Botany students arrives to study botanical specimens. Amidst various comic situations, he comes across one of the students Sulekha Chaturvedi (Sharmila Tagore). As she finds out that he is none other than the Parimal Tripathi whose work she has been a fan of, a romance sparks off between the two. Parimal approaches Sulekha’s brother Haripath bhaiya (David) for her hand in marriage. He sends the same guesthouse watchman representing his family elders. Within no time Parimal and Sulekha are married. 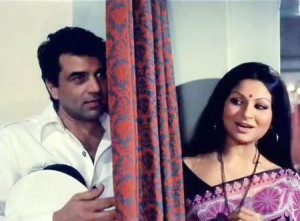 Sulekha is in awe of her brother-in-law Raghavendra Sharma (Om Prakash). For her, the definition of an ideal man and an ideal person is her ‘jijaji’. Jijaji can sniff out people and their intentions. The newly wed Parimal challenges that he can outwit her extraordinarily sharp-witted brother-in-law.

Meanwhile Raghav jijaji writes to Haripath bhaiya inviting the newly-weds to Bombay. The letter is special for two reasons – one, because it is from Sulekha’s favourite jijaji and two, because it is written in chaste Hindi. Jijaji also requests that a chauffeur be sent from Allahabad. There seem to be no chauffeurs in Bombay who speak any language without corrupting it. Parimal decides to turn this into the perfect opportunity. He offers to go to Bombay as jijaji’s newly recruited driver from Allahabad. Though doubtful if anyone can beat her “poojya jijaji”, Haripath bhayia and Sulekha come on-board.

The plan is simple. Since Sulekha’s sister Sumitra didi (Usha Kiran) and ‘jijaji’ couldn’t make it for her wedding, they have not met Parimal. And the photographs sent to them are of 7-year-old Parimal as a joke. So, Parimal shows up at jijaji’s house as Pyaremohan with a terrific recommendation from Haripath bhayia. From the outset, ‘Pyare’, as he prefers to be called, proves to be more than a match for jijaji. What begins is a classic situational comedy with Pyare driving jijaji up the wall with his bons mots, flowery Hindi phrases and his purposeful flirtatiousness with Sulekha. As jijaji and didi are baffled by Pyare’s eccentricities bordering on madness, Haripath bhaiya and Sulekha are enjoying the show. 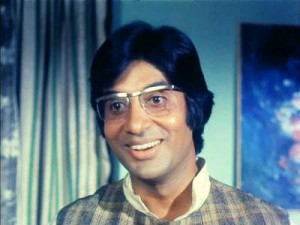 Pyare and Sulekha pretend to elope. Sukumar arrives as Parimal and falls for Vasudha, puzzling Lata and jijaji, creating some of the funniest moments of the film. The drama unfolds with all characters assembled at the temple witnessing Vasudha and Sukumar’s wedding. Finally, jijaji realises the truth and admits humbly that he was fooled by Parimal and blesses the couple.

Chupke Chupke is yet another classic born out of Hrishikesh Mukherjee and Gulzar’s phenomenal partnership in the 70s. Based on Upendranath Ganguly’s Bengali story Chhadobeshi, the screenplay of the film is written by Gulzar and DN Mukherjee who have co-written Anand and Guddi, among others.

S.D. Burman’s collaboration with the director resulted in some of the most memorable melodies that have been sung by Lata Mangeshkar, Kishore Kumar, Mukesh and Rafi. Ab ke sajan, Chupke chupke, Bagon mein and Sa re ga ma, each depict a different mood in the story.

This unsurpassed portrayal of the middle class ensured his films enjoy a universal appeal and wide acceptance. While Hrishida’s astute insights into social subtleties and relationships give life to the film, Gulzar’s ingenious story-telling and masterly knowledge of various forms and dialects of Hindi and Urdu enrich the film with witty dialogue. More than 30 years later, lines from this film are quoted every time there’s a mention of ‘comedy’.