Guddi is the story of a naïve school girl played by Jaya Bhaduri. She lives blissfully in a non-descript town with her family. Her small, happy world consists of her father, brother, bhabhi and, above all, day-dreams of film star Dharmendra.

Besotted with Dharmendra, imagining herself as Meera to Dharmendra’s Krishna, Guddi mistakes her dreamy infatuation for undying love. 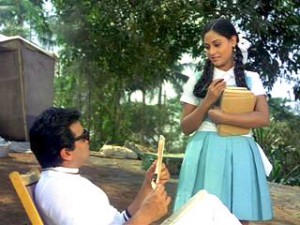 This 1971 movie revolves around Guddi’s life, her passion – Dharmendra, and the events and characters that help her finally understand life in its true essence.

When the good-natured Navin confesses his feelings for her, Guddi has to reject his offer as her love is reserved only for her Krishna – the star Dharmendra. Navin shares his disappointment with mamaji who cannily perceives the situation for what it really is. The psychology professor mamaji analyses Guddi’s behavior in light of cinema’s overarching impact on society. Asking Navin to be patient with her, he assures him things would change for the better.

Mamaji then contacts Dharmendra through a writer friend and explains the entire situation to him, who, after some hesitation, agrees to help professor sahab teach Guddi a lesson about the stark reality that lies behind the glorious, make-believe world of cinema.

Each character in the film is believable and heart-warming, a far cry from the ubiquitous schemers that suffuse television and films circa 2012.

Prof Gupta, Mamaji, the quintessential bachelor, portrayed effortlessly by Utpal Dutt, is a character we’d love to have around, charming us with his cheer and consideration. Navin’s guileless love for Guddi is endearing in its innocence and earnestness. Bhabhi’s mothering of Guddi warms and tugs at the heart of the viewer. The personage of Dharmendra, the handsome ‘hero’ of the 70s, is depicted in the nicest, most empathic way possible, his manner deeply humbling.

Kundan, played by Asrani, is likeable as much for the vain yet simple and harmless humour as for his painful, moving remorse towards the film’s climax.

Guddi is a film that makes you fall in love with the notion of love. Love at its best, love at its brightest, its most innocent and love at its sweetest. Bol re papihara, one of three songs in the film, is based on Raag Miyan Malhar. Sung by Vani Jairam, it is a paean to unrequited love – Guddi’s love for Dharmendra and Navin’s love for Guddi.

Guddi is a classic example of the genius of director Hrishikesh Mukherjee- light-hearted, feel-good cinema that leaves us feeling a warm glow inside. The film portrays ordinary events in the life of a regular girl juxtaposed against the larger-than-life canvas of cinema.

Mamaji and Dharmendra work toward revealing what lies behind the romance and glamour of the silver screen. As events unfold one after another, and Guddi is a step closer to letting go of her unrealistic infatuation with the movie star, the film brings to the fore the message that was shadowed in the background of the story. The writer, Gulzar, seamlessly reconciles the unheard stories of the unsung heroes of cinema with Guddi’s illusory bubble. Before you know it, the milieu shifts from Guddi’s small town to bustling sets in movie studios in Bombay. 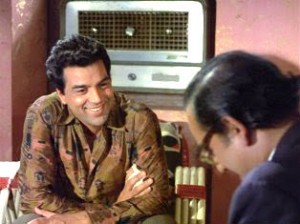 As the well-meaning conspiracy hatched by mamaji and Dharmendra plays out, Guddi watches several film shootings and realizes that technicians, camera persons, writers, make-up artistes, et al help morph actors into stars. They are perhaps the real heroes. The glorious earn their glory through the blood and sweat of these unknowns. She realizes that there’s a lot more to it than what meets the eye.

Through the sub-plot of Kundan who escapes his responsibilities and real life to become a ‘star’, the writer sends out a strong message that the glamour we are blinded by is, in reality, achieved with much hard work and diligence.

A motif that appears through the film is the game of ‘statue’ the characters play with each other in jest. In the final moments of the film, Hrishida’s finesse turns the game into a life-altering moment, just as Navin is all set to leave for good, disheartened by his unrequited love. Guddi calls out, ‘statue’, and confesses her love for him. One doesn’t expect such a use of the seemingly flippant in a serious moment such as this, defusing a laden moment with humor.

The movie leaves the viewer satisfied with the outcome of the love story of Guddi and Navin and grateful to Dharmendra for making it happen despite a stubborn teenager’s committed infatuation with a film star.

The film ends with a delicious irony as mamaji utters awash with relief, “Jai Dharmendra!”