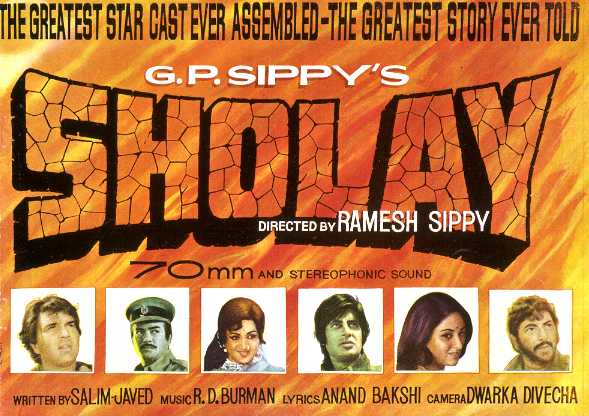 A train rolls into a station, the steam engine chugging to a halt. An unremarkable spot in the Indian hinterland, this could be anywhere. A police officer disembarks, gets on a horse and barrels away into the expanse. Here begins the tale of perhaps the greatest Indian movie made. Sholay – the tallest edifice in Indian movie history. Many legendary firsts, many everlasting moments, Sholay is a slice of history. If Indians are guilty of loving movies like nothing else, this film might well be the primary offender.

A tale where feudalism battles to stay relevant against modernity, it is the quintessential spaghetti western set in an Indian milieu – Good versus bad, black & white characters, timid villagers, heroes who exude cool and villains who relish their power. This is stuff that would have made Sergio Leone proud. The music, especially the score that accompanies the opening credits, seems a tribute to Ennio Morricone from RD Burman. As the policeman rides into the village, Ramgarh, we meet the primary character in this tale, Thakur Baldev Singh. An upright nobleman who once served in the police force, he wants the services of two remarkably brave thugs to carry out his plot of vengeance.

Enter Jai and Veeru, two of the most enduring personas in Indian cinema. The laconic Jai and the loquacious Veeru are the perfect foil for each other, making them an effective band of thieves. The song Yeh Dosti is probably the most popular ode to friendship in India. Thakur Baldev Singh recounts his experience of their bravery and we find ourselves watching one of the most riveting action sequences in Indian cinema, the famous dacoit attack on the freight train. This sequence was one of the most challenging during filming, taking nearly two months to wrap.

After a few comedic escapades, Jai and Veeru are recruited by Thakur to capture his arch nemesis, the fearsome Gabbar Singh. As we move to Act 2, we are introduced to perhaps THE most iconic villain in Indian films. Gabbar was played by the unknown Amjad Khan in a performance so powerful, the viewer is left reeling long after the film has finished. Gabbar’s introduction in the movie is a master class in the portrayal of a super-villain. “Tera kya hoga, Kalia?”

Then there is the other famous character from the movie, Basanti. Hema Malini as Basanti opposite Dharamendra’s Veeru forms the single most popular romantic pairing in Hindi cinema. (Insert Dharmendra’s “suicide”sequence or the first meeting of Veeru and Basanti.)

The action is unrelenting. Gabbar attacks Ramgarh but is driven away by Jai and Veeru. Thakur finally reveals the reason for his revenge – the slaughter of his entire family, except his daughter-in-law Radha, by Gabbar Singh, who also cuts off Thakur’s arms. “Yeh haath mujhe dede, Thakur!”

As the action unfolds, so does love. Veeru falls for the equally talkative Basanti. Jai is drawn to the reclusive Radha, a more poignant love that seems doomed from the start. Basanti and Veeru are captured by Gabbar and Jai rushes to rescue them. And then arrives the most anticipated moment of the film – Mehbooba, a landmark song in Hindi films showcasing Helen and sung by RD Burman.

In the battle that follows, Jai dies and Veeru realizes that his friend sacrificed himself to save everyone else. Enraged, he chases after Gabbar and beats him to within an inch of his life and hands him over to Thakur who has waited long for this moment.

The released version of the film has a changed ending with Gabbar Singh apprehended by the police. In the original version, released on DVD, Thakur wreaks a terrible vengeance on Gabbar, mercilessly trampling with spiked boots, severing his arms and finally killing him.

Sholay casts a very long shadow. It is as much an event as a movie, a watershed moment if Indian films ever had one. With his portrayal of Jai, Amitabh Bachchan moved inexorably towards the superstardom he has now made his own. Sholay was the longest running movie for decades, the highest grossing movie for many years. The spin-offs inspired by this film could constitute a minor industry of their own. Ramnagara, outside Bangalore, where the film was shot has even named a locality Sippynagar as a tribute to the film’s maker and remains a tourist spot to this day. Most ironically, Sholay won just one Filmfare award, for editing. The film is 188 minutes long. Upon release, the film was termed a disaster, a failure and likely to be forgotten quickly…