Home  »  Funny   »   Meet the survivors of the funniest bike accident

Modern Psychologists nowadays tell us we should not even scold young children let alone give them a good hiding, lest we hamper stunt their creativity once and for ever. But we Keralites believe in the contrary, that a good beating is an essential part of childhood training. We even have numerous proverbs to prove the same, “if you have just one child, beat him with a club”, “spare the rod and spoil the child”, “if you get the thrashing you deserve, you will think the way you ought to think” and “the ignorant child will be  jolted  into awareness once he feels the itch of the birch”. Now, anyone hearing these proverbs will be under the staunch belief that the great scholars who coined these phrases for Malayalam language are misopedists (child haters), and can we honestly blame them for thinking so? 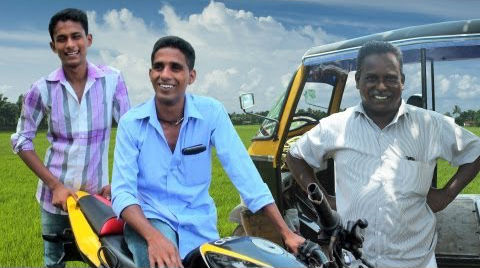 Even so, there are very few people who publicly acknowledge that a beating did them good, and two such prodigies are Rajith and Rahul.  Even though their names might sound unfamiliar, suffice to know that both of them are internationally renowned. If you still fail to recognize the two celebrities who are single handedly responsible for spreading the purple patch “pani pallumvellathil kitti” which had previously been confined to a small district in Alappuzha to Malaylalis around the world, then catch up on what you’re missing out by clinking on this link, meet the survivors. They are the heroes of the funniest bike accident ever recorded.

My colleague Anand was the one who introduced me to the video and once we watched it a couple of times, we decided to purchase the video and put it up on the site. After watching the video more times than can be counted, I felt a compelling itch to meet these young men. The best place to meet them would obviously be the site of the infamous accident and thus we set out on the grand quest.

Along with the daredevil bikers, we were also fortunate enough to meet the auto driver Sashikumar, alias Saji. At the time of the incident, his father was admitted in the Alappuzha Medical College, diagnosed with cancer and Saji had been dashing around with food and medicine for his father. As he turned the corner in his auto, he found, to his utter consternation, a bike standing on its head. Poor Saji, swerving to save the rider of the bike, ended up smashing the fence of a nearby toddy shop and crashing into a massive tree. The front of the auto rickshaw looked like it was chewed up and spat out by the tree. As he got out of the auto, he realized the biker had been pulling the stunt for the purpose of it being filmed on a mobile camera. This infuriated him beyond any measure and he became completely insane with anger.

His outrage increased when his question of, “Is the middle of the road any place for such shenanigans?” was answered with a brazen “You ought to have honked when you turned the corner”. A mighty scuffle ensued, but luckily two policemen turned up on time to ensure that the boys weren’t pulverized. However, Rahul who had jumped into the police jeep to escape the thrashing ended up sitting on a policeman’s hat. Even though he tried to rectify the grave insult by redeeming the hat with a great show of reverence, he was so agitated that he inadvertently ended up pulling out the logo on the hat. But the policemen proved to have hearts of gold – they chastened the showmen, laughed at them, advised them and fined them for driving in a state of inebriation.

Rahul and Rajith are of the opinion that the beating did them a world of good, as they seemed to have acquired a maturity they had previously lacked. This also resulted in a roaring friendship with the autodriver Saji. They never fail to drop in on him if they are ever near the vicinity of his village. I shall refrain from saying more, and leave you to listen to the story from the horse’s mouth.