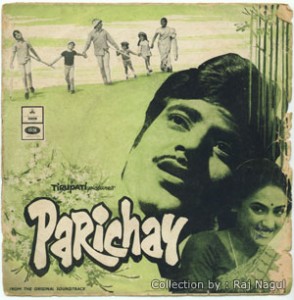 Sa re ke sa re ga ma ko le kar gaate chale, an unusual lyric of a song of an unusually entertaining film. Gulzar’s Parichay promises to entertain, move and engage you and it more than fulfills the promise.

A sweet and touching story filmed just as well as it is written.

Parichay is a tale of love and nurturing, a story of five children and their estranged grandfather, Rai sahab, learning to love each other despite themselves. Rai Sahab (Pran) is an army colonel from the days of the British rule. A stickler for discipline and orderliness, Rai sahab has a stubborn head and a heart of gold. Only he doesn’t know how to express this love to his grandchildren. He stays in his bungalow in the village with his sister Satidevi (Veena).

In retrospect, Rai Sahab had a son Nilesh (Sanjeev Kumar) who was struggling to pursue music professionally. And Rai Sahab, as expected, was dead against it. Neelesh eventually went through with it and got married to his music guru’s daughter once again to his father’s dismay. Rai Sahab, true to his headstrong self, asked Nilesh to leave the house if he couldn’t live by his rules.

Nilesh and his wife Sujata end up living a life of utter poverty and misery eventually succumbing to illness. They leave behind their five children Rama (Jaya Bhaduri), Ajay, Vijay, Meeta and Sanju and now 17 years later Rai sahab brings his son’s children to his house to take care of them.

His five grandchildren surpass Rai sahab in stubbornness. Mischievous and troublesome, the children, according to everyone in the village, are nothing less than the evil personified. Retaining a teacher for them turns out to be a mammoth task for Rai sahab. Every single teacher who has come to teach them has had to run for his life.

Meanwhile, struggling Ravi (Jeetendra) can’t seem to find a job. Just then his mamaji (A K Hangal) writes to him asking to come to the village to settle some property matter and also to check out a prospective job. His roommate and friend Amit (Vinod Khanna) suggests he take that up temporarily to ease the financial constraint. 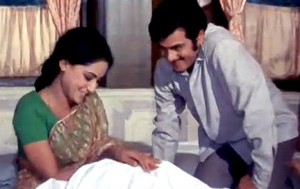 Musafir Hoon Yaaron kick starts Ravi’s departure into what’s going to change the course of his life. Yet another splendid tune by the genius RD Burman, it makes you want to sing aloud whether you can or not. The song reflects the protagonist’s take on life and the spirit of moving on; one of the most popular songs ever from the treasure of Hindi cinema, Musafir Hoon Yaaron spouts life philosophy in the most unaffected manner. Sample this – Ek raah ruk gayi to aur jud gayi, main muda to saath saath raah mud gayi, hawa ke paron par mera aashiyaana. It unearths emotions that every human being feels at some point or the other.

Ravi meets Rai sahab. The job offered to him is to straighten out and teach the children. Ravi has a tough choice to make. Caught between his hand-to-mouth situation and a job that seems nothing less than a litmus test, Ravi decides to take it up.

As expected, the children play various pranks with Ravi to make him give up. However, to their displeasure, Ravi stays back, stands his ground and to Rai Sahab’s and loyal servant Narayan’s (Asrani) surprise, refuses to punish the so-called little monsters. Slowly the embittered children see Ravi in a different light. His love, care and nurturing bear fruit. The children transform into becoming responsible, considerate and loving towards their grandfather. Ravi’s gradual guidance and affection brings out a completely different side in them.

Ravi and Rama develop feelings for each other and in the end get married to each other with Rai sahab and mamaji’s blessings.

Parichay is as much about its heartening story as it is about its melodious music and moving lyrics by Gulzar. Every song of the film is a treasure: Beeti na bitayi raina by Lata Mangeshkar and Bhupinder, Mitwa bole meethe by Bhupinder and the unforgettable Musafir hoon yaaron.

Parichay is a film that does not set out to impress you yet it leaves you feeling entertained and moved both at the same time.