Jammu and Kashmir is the northern most state of India. Situated mostly in the Himalayan mountains, Jammu and Kashmir shares a border with the Indian states of Himachal Pradesh and Punjab to the south, Pakistani administered Azad Kashmir and Northern Areas to the west and the People's Republic of China to the north and east. The territory is disputed between Pakistan and India and it is referred to by Pakistan as Indian-occupied Kashmir.

Jammu and Kashmir consists of three divisions: Jammu, the Kashmir valley and Ladakh. Srinagar is the summer capital, and Jammu its winter capital.

The Jhelum River is the only major Himalayan river which flows through the Kashmir valley. The Indus, Tawi, Ravi and Chenab are the other major rivers flowing through the state. Jammu and Kashmir is home to several Himalayan glaciers. With an average altitude of 5753 meters above sea-level, the Siachen Glacier is 70 km long making it the longest Himalayan glacier.

The Dumhal is a famous dance in the Kashmir valley, performed by men of the Wattal region. The women perform the Rouff, another traditional folk dance. The Indian Constitution does not allow people from regions other than Jammu and Kashmir to purchase land in the state. As a consequence, houseboats became popular among those who were unable to purchase land in the valley and has now become an integral part of the Kashmiri lifestyle.

Jammu's Dogra culture and tradition is very much similar to that of the neighbouring Punjab and Himachal Pradesh states. Traditional Punjabi festivals such as Lohri and Vaisakhi are celebrated with great zeal and enthusiasm throughout the region. After Dogras, Gujjars form the second-largest ethnic group in Jammu. Known for their semi-nomadic lifestyle, Gujjars are also found in large numbers in the Kashmir valley. Similar to Gujjars, Gaddis are primarily herdsmen who hail from the Chamba region in Himachal Pradesh. Gaddis are generally associated with emotive music played on the flute. The Bakkarwalas found both in Jammu and the Vale of Kashmir are wholly nomadic pastoral people who move along the Himalayan slopes in search for pastures for their huge flocks of goats and sheep. 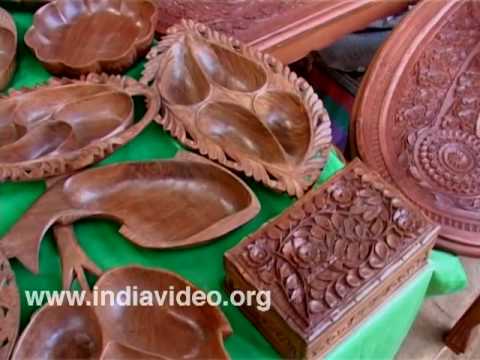 The poetry on wood, Jammu and Kashmir

Kahwa, the traditional tea of Jammu and Kashmir