Science / Numerical derivations
Vishu conveys the message of auspiciousness and prosperity. The advent of this festival is marked by the widespread blooming of Kanikonna (Laburnum) flower. Once, this was the New Year festival of Kerala; much before the Kollavarsham calendar began. In the nearby State of Tamil Nadu, Vishu is celebrated as the New Year day. Kalivarsham and Sakavarsham also begin with Meda Vishu. Vishu is considered as the New Year according to Mathematical science also.

On the Vishu day, which has geographical and astrological relevance, the Sun is believed to come above the line of Equator. There are two phases in a year namely Dakshinayanam and Utharayanam. While in the former, the Sun is on the southern side of the Equator and in the latter it is on the northern side. Due to this, in one phase the duration of the day will be longer and the night shorter; while the reverse happens in the other phase. The only two days in which the Sun rises on the line of the Equator are the Tula Vishu and Meda Vishu.


History
Chithira Vishu finds mention in the incomplete Trikodithanam Shasanam by Bhaskara Ravivarman who ruled Kerala between AD 962 and 1021. According to scholars, Vishu has become a major celebration by then. It is believed that Vishu celebrations began in Kerala during the reign of Sthanu Ravi who ruled between AD 844 and 855. Vishu is mentioned in William Logan’s Malabar Manual as follows: Mathematically Vishu is the New Year day. On this day, Sun rises straight from the East.


Mythology
It is said that Lord Sree Krishna killed the demon Narakasura on the Vishu day. Another interesting myth is related to the demon king Ravana. Ravana had never allowed the Sun to rise straight from the East and after Ravana’s death it was on a Vishu day, that the Sun started to rise from the East.

Bihu, Ugadi, Vishu
Vishu is celebrated as Bihu in North India. In the southern states of Andhra Pradesh and Karnataka the festival is called Ugadi.


Vishukkani
Vishukkani or the viewing of the auspicious objects is an important ritual associated with Vishu, the harvest festival of Kerala. It is believed that the first object that one sees in the Vishu morning determines the prosperity in store for the coming year. Hence, a set of auspicious objects will be arranged to be first beholden in the morning.

The Vishukkani, consisting of rice grains, fruits, Konna (Laburnum) flowers, gold and fresh coins – all signifying prosperity – will be arranged by the eldest female member of the family on the day prior to the Vishu day. Placed in a sparkling bell metal pan in front of the image of Lord Krishna, the set gets complete with a lighted Nilavilakku (traditional lamp of Kerala).

Vishukkani is also arranged in temples. The temples of Guruvayoor, Sabarimala and Kulathupuzha are famous for the Vishu celebrations and Vishukkani sighting.


Vishukaineettam
Vishukaineettam or hansel given by elders to children is an important ritual in connection with Vishu celebrations. On the Vishu day, after sighting the Vishukkani, the elder person in a family hands out money to the younger members of the family. The effect of this symbolic gesture is believed to stay for the rest of the year. Money is also handed out to relatives and to domestic helps.


Vishukkani Vili
A practice prevalent in the north Malabar region of Kerala, Vishukkani Vili involves children, who move from one house to the other in villages, calling ‘vishukaniye, vishukaniye.’ As they arrive at houses giving out this call, they are given a type of rice cake – the kaniyappam, which the children collect by using the fresh mid-rib of coconut leaf. While this takes place, the local astrologer arrives and he would handover the Vishu astrological prediction for one year, written on coconut leaf to each household. This prediction would touch on matters pertaining to availability of rain, fluctuation in agriculture yields etc. The auspicious day for tilling agriculture land by using oxen was also decided by the kaniyan. This would be a day coming between the Vishu day and Pathamudayam – the 10th day of the Malayalam month, Medam.


Vishu Chal
Chal means channel in Malayalam. On the Vishu day, the spade is decorated using rice powder and prayers done. The senior-most member of the family and others enter the rice field with the decorated plough and spade. A type of pancake is deposited in the field and small channels (called chal) are then made in the field. This is followed by covering the field with cow dung and green manure. This filed is later used to grow rice and also vegetables like elephant yam and some tuber crops.


Vishu Kanhi
On the Vishu day, the breakfast comprises Vishu Kanhi (rice porridge) and traditional vegetarian feast for lunch. The rice porridge for breakfast is made of rice, coconut and jaggery. This breakfast dish is popular in north Malabar region during Vishu. And for the feast during lunch, a special curry made of jack fruit (Erissery) and mango form important dishes. 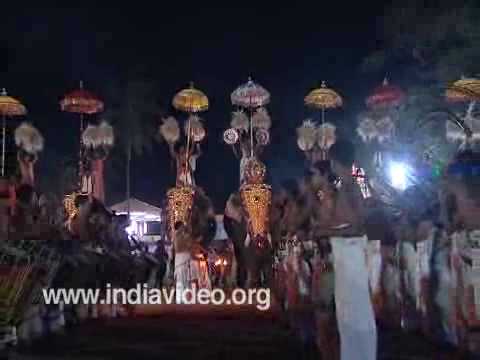 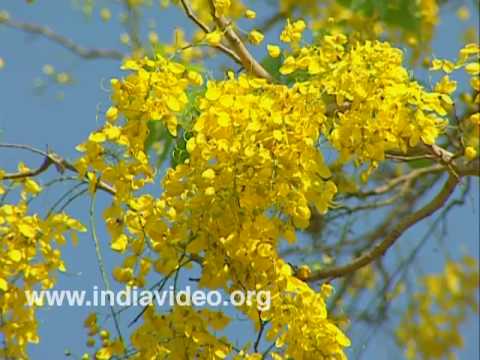 Showering gold to usher in the New Year
01:04 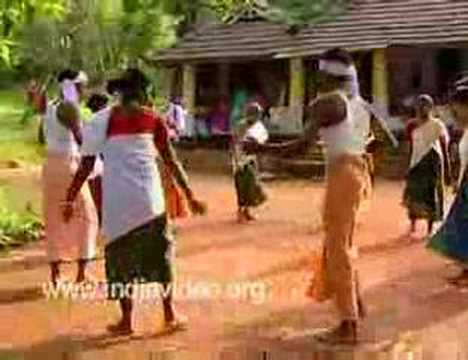