Magic Carpet / Pookkalam
The courtyard of every village house is decorated with beautiful flowers of different colours as a ritual to receive Mahabali (the beloved king of Kerala sent to the netherworld by Vamana, the incarnation of Lord Vishnu) during the Onam season. The floral decoration is called Athappookkalam because the ritual commences from the morning of Atham day (representing the asterism- Atham) and continues till the morning of the tenth day, the Thiruvonam day, which has much astronomical significance. Though the Athappoo has lost much of its ritualistic significance, especially in North Kerala, women and children, the traditional makers of the flower carpets, still avidly follow the custom.

The Athappoo is traditionally circular in shape and about four to five metres across. The outline or kalam is drawn using white clay or dough. Starting from the Atham day, every day a ring of flowers and leaves is added to the pookkalam making it grow in size till it reaches its final shape on Thiruvonam day. The rings are supposed to signify the presence of gods and goddesses. At the centre of the floral decoration, the clay idol of Vamana, known as Thrikkakkarayappan, is placed.

At Onam time, Nature is in full bloom and the women and children find no dearth of flowers for the Athappoo. Thumba, Thulasi, Kadali, Mukkutti, Chethi, Shankupushpam, Manthaaram, Jemanthi and Chembarathi are some of the main flowers used. A flower is dedicated to each day of Onam and dominates the decorations of that day.

While the boys compete to gather flowers of varying colours, young ladies, assisted by children make the floral decoration every morning. Girls in a neighbourhood join together and taking turns, perform the poovideel (ritual for flower offerings) before sunrise at the pookkalam, with accompanying songs, during all ten days. On the final day, small boys compete with each other to find special rice sweets in banana leaves – the poovada - hidden by the girls amidst the decks of flowers. The boys then take the lead in ceremoniously removing the floral structure – the Poomaattom.

Another ritualistic tradition of Onam is the performance of the Onathaaru in the district of Kannur. The Onathaaru is a Theyyam, an artiste of a fascinating art form by the same name, dressed up as Onathappan or Mahabali. The Theyyam, usually a small boy from the caste of Vannans, will be dressed in an exotic costume and have the trademark ornamental headgear. He holds a bell in his right hand and a small bow - the Onam bow - in his left. While he performs his ritualistic dance, he rings his bell and accompanying Vannans beat on drums and sing the story of Mahabali and so on. The Onathaaru who personifies the visiting Mahabali goes from house to house.

The Onappottan or the Oneshwaran is a Theyyam that is almost identical to the Onathaaru. Instead of the bow, this Theyyam holds an umbrella made of tender palm leaves.  Members of the caste of Paanans of Kozhikode dress up as Onappottans. As this Theyyam does not speak, it has been given the name pottan meaning mute.

Dancing damsels
Ladies in the limelight!

The Onathullal, another kind of dance, is performed by members of the Velan community. Hence it is also known as Velathullal.  Here, two women wearing crowns, wave tender coconut leaves and dance to the beats of thudis (small drums) and kinnams (plates). The accompanying artistes also sing the Onam story.


Nose trick
A bird on the nose is worth two in the bush!

In Mookkevidya, the performer does the bit by balancing a wooden bird on a beam that is placed on the nose. There are variations to this such as Nokkuvidya where the performer makes puppets dance on a board, on a beam balanced on the upper lip.

Athachamayam
The Athachamayam, originally a ritual that celebrated the setting out to Thrikkakkara Temple where Vamana is the presiding deity, refers to the special Onam celebrations held in Kochi. Though the origins of this tradition are not clear, this used to be followed by the Zamorin King of Kozhikode and the Maharaja of Kochi. In due course of time, Athachamayam died out in Kozhikode. With the encouragement of the government that declared Onam a national festival in 1961, Athachamayam continues in Kochi.

Aranmula Vallomkali
It was customary for Kattoor Mangaad Illam, a Brahmin homestead, to host lunch for Brahmins on the day of Thiruvonam. One year, not a single Brahmin turned up for the Onasadya. However, later in the day a Brahmin boy came to the illam. After lunch, the boy told Bhattathirippad (the head of the family) that he would not come for lunch again. That night, Bhattathirippad had a dream and understood that the boy was Lord Krishna, the presiding deity of Aranmula Temple. From then on, he decided to take the sadya to the Aranmula Sreekrishna Temple.

The tradition is continued as a ritual and on Uthradam night - the day before Thiruvonam - a richly festooned thoni (boat), the Thiruvonathoni, decorated with Kadali plantains, tender palm leaves, traditional lamps, ripe arecanuts and so on is escorted from Kattoor to Aranmula by palliyodams (snakeboats). This is laden with groceries, fruits and vegetables required for the feast to be offered to be deity.  The procession reaches the temple by early Thiruvonam morning. The local people used to accompany the Thiruvonathoni in their respective valloms (small boats). This journey evolved into the Aranmula Uthruttathi Vallomkali.

Hundreds of devotees throng the temple ghats early in the morning to witness the annual event.  Loud chants of vanchippattu in praise of Lord Parthasarathy (Lord Krishna) by the palliyodam crews rent the air and devotees pay obeisance to the sacred boat by offering betel leaves, arecanuts and tobacco as a mark of respect to the sacred snakeboats in which Lord Parthasarathy is believed to be omnipresent.

The Brahmin who leads the Thiruvonathoni procession hands over the sacred flame in the boat to the head priest at the Parthasarathy temple. The priest takes the flame to the sanctum sanctorum.

Vallasadya
Some time after this, groceries and other articles for the feast at the temple are handed over to the temple authorities. The Onasadya is held on the temple premises after the noon puja. During the sadya, devotees, numbering thousands, sing out their requests for various items and are replied to in the same fashion. 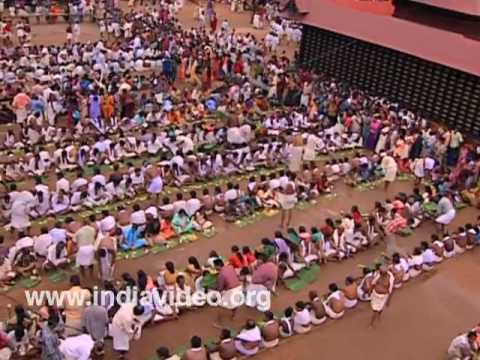 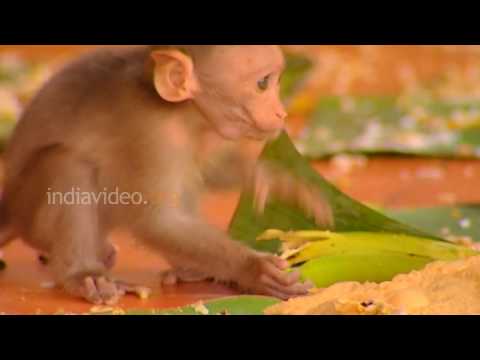 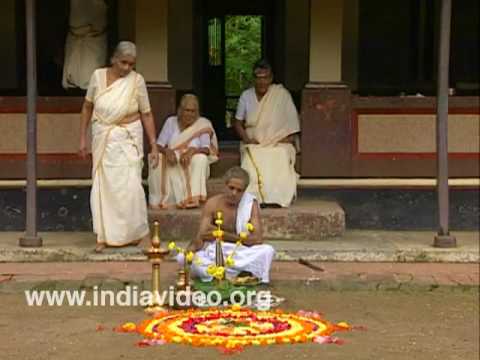 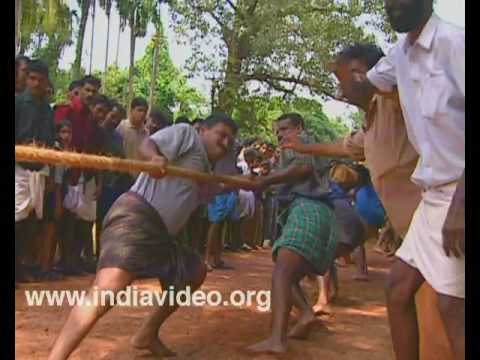 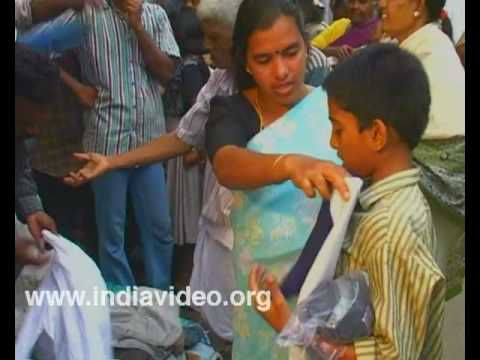 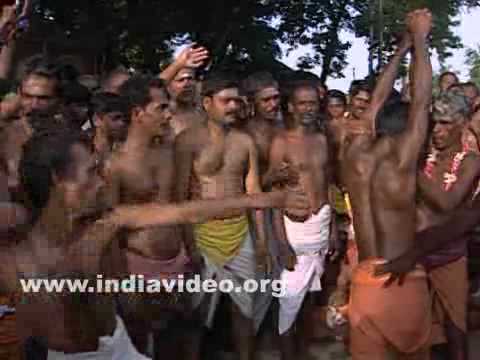 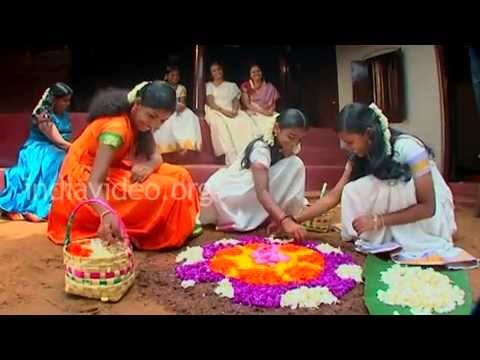 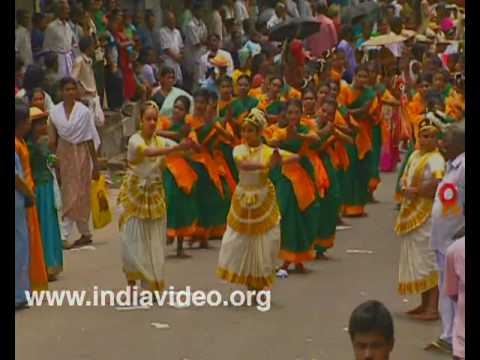 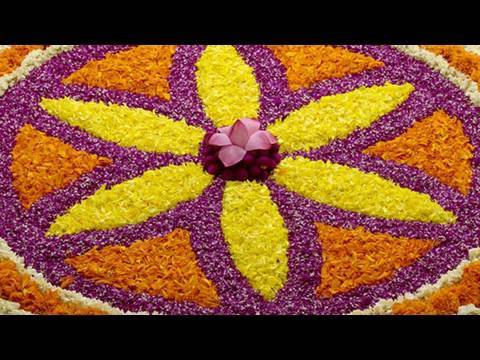 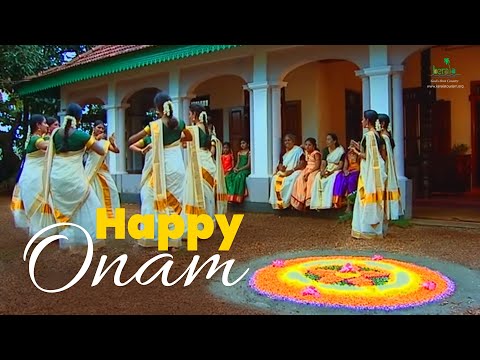 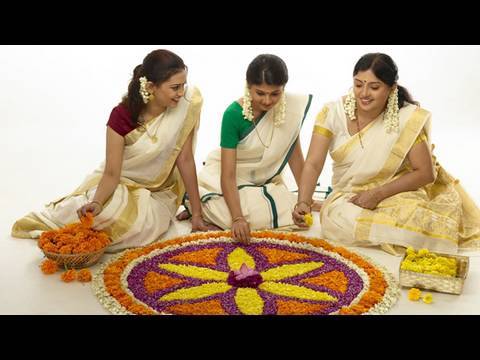 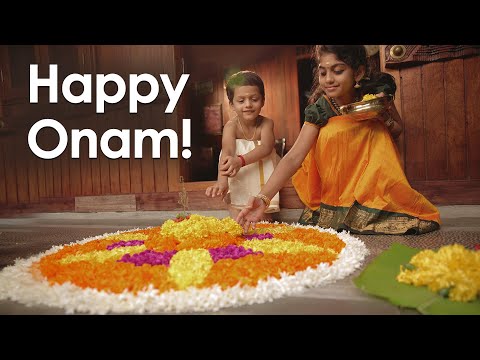 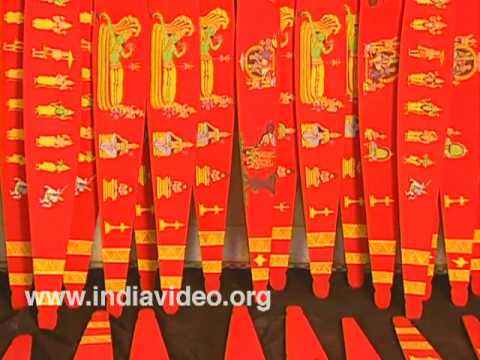 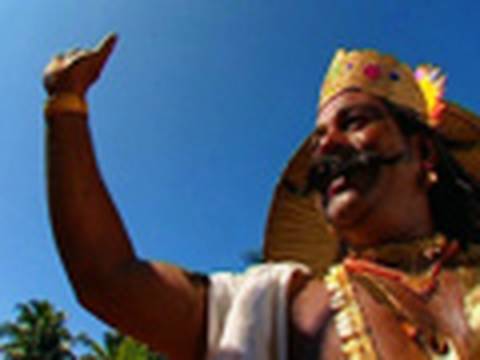 King Mahabali and the festival of Onam
01:11 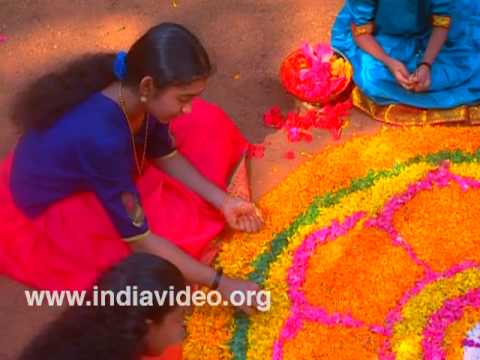 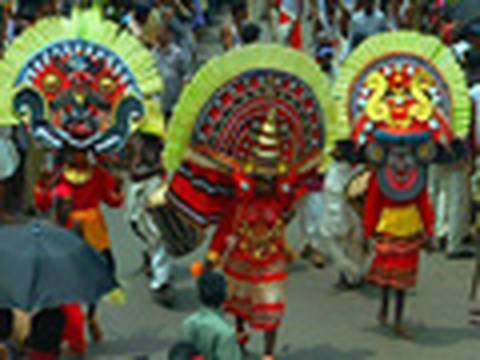